McLean, Va. — August 29, 2019 — A team of craftsmen from Steele Foundation LLC has been honored by the Washington Building Congress (WBC) with a 2019 WBC Craftsmanship Award for underpinning and shoring of Marriott’s new Moxy Hotel at 11th and K Streets N.W. in downtown Washington, D.C. Steele Foundation LLC is owned and operated by a father-son tandem of Lyles School of Civil Engineering grads.

Their work at the Moxy Hotel is considered exceptional given the sensitivity of the historic D.C. structure. Extreme care was necessary to support the existing exterior façade with custom steel shoring frames to allow for demolition and installation of the new structure.

“Since 1956, the Craftsmanship Awards have honored WBC members who have held up high standards of excellence in the construction trades,” said Karen Cotton of HITT Contracting, Chair of the WBC Craftsmanship Awards Committee. “We are pleased to recognize Steele Foundation LLC’s craftsmen for their significant achievement and skills demonstrated on the Moxy Hotel project.”

“We couldn’t be prouder of our team of craftsmen because this project required the highest level of underpinning and shoring skill given the restricted access, fragility of the structure, and inherent risks involved with preserving the historic façades,” said Steele Foundation LLC President Andy Steele (BSCE ’86), who is a former member of the Lyles School of Civil Engineering’s Alumni Advisory Council.

The structural engineer on the project, Sanjay Khanna, P.E., principal of Tadjer-Cohen-Edelson Associates, Inc., said:”We’ve had the pleasure of working with Steele Foundation on numerous engineered foundation projects over the last few decades. The Moxy Hotel project is the latest example of the precision they bring to one of the most complex and often hazardous parts of any construction project.”

Asked to comment on what this award says about his team of craftsmen, foreman Bokciu said, “We’re able to do a difficult job that many companies can’t do because, number one, we know what we are doing and, number two, the company gives us everything we need to get the job done.”

Over the past half century, Steele Foundation LLC has established itself as the go-to firm for architects, engineers, contractors and developers who know that engineered foundation sheeting, shoring and underpinning can make the critical difference in the success of their projects.

The company has completed more than 1,600 projects during its five decades in business. Recent projects, in addition to the Moxy Hotel, include Reston Town Center Blocks 4 and 5; General Dynamics headquarters in Reston; 50 Florida Avenue, N.E.; Arizona State University Foundation, 1800 Eye Street, N.W.; and the historic Patterson Mansion at Dupont Circle. 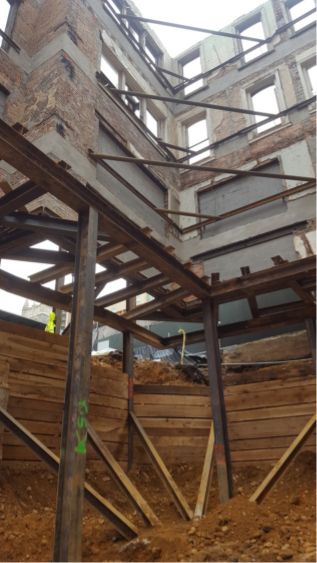 The Moxy Hotel project by Steele Foundation LLC, honored with a 2019 Washington Building Congress Craftsmanship Award in the site work category, required the highest level of underpinning and shoring skill given the restricted access, structural sensitivity and inherent risks involved with preserving the historic façades.

Foreman Olsi Bokciu led the five-person team of Steele Foundation LLC underpinning and shoring craftsmen on the Moxy Hotel project at 11th and K Streets N.W. in downtown Washington, D.C. He proudly displays the 2019 Washington Building Congress Craftmanship Award in the site work category. Bokciu, who joined the company in 2005, has been a foreman since 2008.